A Filipino-Austrian youth and Afghan and Iraqi refugee children,enjoying the trek in Dachstein woods

On the 10th of February, 2017, I was invited as the key speaker by the dynamic Ms Arlene Castañeda to the formal unveiling of her pet project, Servus Pinoy! – an online magazine that caters primarily to the Filipinos in the diaspora, by allowing them to express themselves, their dreams and aspirations, or any other topics close to their heart. As the topic of cultural continuity is one that is very close to my heart, it was a privilege to accept Arlene’s invitation.

I spoke on many things at the event, but my core focus was on the importance of handing over (bequeathing our children, especially those born in the diaspora) the culture and knowledge of the roots from which they stemmed); the immeasurable and positive influence such handing over can have on the overall psychic of those children and, by the same token, the negative effect not doing so can also wrought.

We live in a world that is ever changing. One of those changes is the constant migrating of one set of people from one place to another – whether for economic or political reasons. Whatever the reasons, the one thing migrating families have in common is the sense of disorientation that comes from moving from the known to the unknown: and one of the common side-effects of that is the struggle to feel accepted in a society that may not readily want to welcome migrant families with arms opened wide; and the truth of the matter is that most biological citizens of many countries rarely do, since they regard migrant families, especially economic ones, as ‘social-amenities freeloaders’ and ‘job-stealers.’

Being on the receiving end of such derogation can bring about untold physiological and psychological impact that may take years to heal, if at all. Which probably explains why most people with migrant roots can sometimes be ‘overly sensitive’ about issues such as racism and stereotyping, or a discrimination of any kind. This so-called ‘over sensitivity’, whether rightly or wrongly perceived, is often engendered by deep-seated lack of self-esteem: and is the result of being made to feel unwanted and unworthy whatever your contributions to the new home in which you have found yourself.

A young person who feels this way as a result of what he or she has been told (directly or indirectly) about her roots will often try to eradicate most aspect of her biological cultural norms, in the hope that this would make her acceptable by those discriminating against her. We hear say, every day, that children are the leaders of tomorrow. Which begs the question, what kind of leaders would ones full of self-hatred make?

‘If you would divine the future, then first study the past’, so states a famous saying by the renowned Chinese Philosopher, Confucius. My own daughter once told me. ‘You are my mirror and the true reflector of whatever values and beliefs I hold dear, Mom. Whenever I need to re-instate what matters most, all I have to do is remember what you’ve taught me.’ Which goes to show the importance of handing over, of imbuing children with a strong sense of pride in their roots, whatever they may hear to the contrary outside their homes. 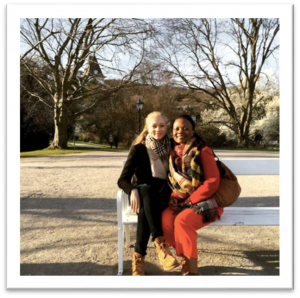 And so, if parents and guardians would studiously counter the negative labeling their wards receive outside, with positive inputs about the history and culture of their mother country (or father, as the case may be), it would counteract whatever the child or young person may hear or see on a daily basis as he or she goes about her day-to-day routine.
After all, whose stories are most children going to believe and place importance on – those told by random hateful strangers, or the narrations from a person they know loves them and has their back?

Arlene’s Servus Pinoy!, though a beloved initiative, is the offshoot of an even bigger enterprise of hers: The Center for Austrian and Filipino Culture and Language. However, one thing both have in common is the promoting of the Philippine’s culture and languages to their children and young people.

Sarah Udoh-Grossfurthner is a writer of thought-provoking (and often true-life based) stories. The author of Just An Ordinary Guy, Pathways of But He Calls Me Blessed and numerous articles, she holds an MA in Professional Writing from University College, Falmouth Cornwall. 10% for every purchase of Sarah’s books goes to charitable causes focused on children and women issues. Sarah is a full member of the prestigious Society of Authors. She lives in Vienna.