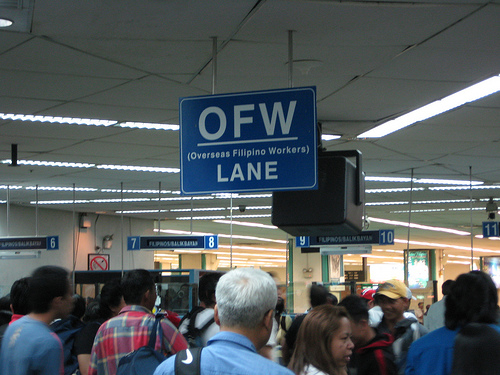 Filipino migration in Austria began in the early 70’s  as the  Philippine government established an official labor exportation policy that aimed to help repay the Philippines’ foreign debt through the Programme for Overseas Filipino Workers. In fact, as a result of conditions imposed on to the Philippines by the IMF’s structural adjustment policy, the Philippine peso decreased in value, leaving numerous Filipinos no other recourse but to migrate abroad in search of economic opportunities, a trend which continues unabated today. Succeeding governmental regimes encouraged labor exports, with Filipino presidents Corazon Aquino and Fidel Ramos creating various intermediary labor agencies facilitating Filipino labor flows abroad.
During the 1970s the main destination region was the Middle East, where mainly Filipino men went to work in the manufacturing, construction and transportation sectors. The feminization of migration began with the new industrialization of Asian countries (1980-1990), at the same time that the labour insertion of migrants started in activities related to services. Austria was one of the countries that experienced a sustained growth of Filipino labour migration. The work previously carried out by women at home is not substituted by public service nor by the participation of men which creates a demand for paid care services. Filipino women participate in this context.
It should be noted that in the early 70’s up to the  late 90’s, the political and economic conditions within Austria encouraged an increase in Filipino labor migration. Hundreds of nurses and their families flocked to Austria before the advent of stricter immigration policies in 1996 when the mode of entry became quite difficult.

Level of Education and Income

Although it is difficult to garner exact figures that provide specific numbers on the different levels of education characterizing Filipino migrants in Austria, anecdotal evidence indicates that Filipino labor migrants are generally well-educated. Hundreds of professional Filipinos are working under the auspices of the United Nations and other international organizations and the Filipino pioneers are highly qualified nurses. Filipino migrants in Austria would not be classified as being part of lower class social groupings in the Philippines and in fact would likely be classified as being part of the middle-class.